40,000 tourists to take a fresh look at Geraldton 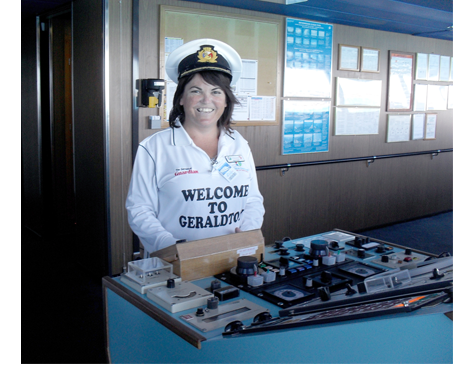 Western Australia’s cruise ship industry is expanding; and Geraldton is set to take advantage of the growth with more dates added to its 2012 cruise ship calendar.

Seventeen cruise liners are booked to visit Geraldton next year – up from 11 in 2011 with the expectation of 40,000 visitors coming ashore to take a fresh look at the region.

The City of Greater Geraldton and the Geraldton Port Authority recently formed a partnership to fund a full time Cruise Ship and Information Officer. Based at the Geraldton Visitor Centre the newly appointed officer, Marchelle McMath, will work with cruise ship operators to include Geraldton as a stopover destination and encourage more passengers to come ashore.

City Manager of Economic and Social Development, Karen Godfrey, said this is the perfect opportunity to ensure visitors have a great experience while ashore and encourage them to consider Geraldton as a holiday destination in the future.

“Comments from cruise ship passengers are extremely positive with more than 90 per cent saying Geraldton is a friendly, very clean and welcoming City with outstanding tourist attractions,” she said.

“With this kind of response, surveying passengers on the ground, we believe that we are in the perfect position to increase the number of cruise ships visiting the City each year, increasing the number of visitors.” Geraldton Port Authority CEO, Peter Klein, said the partnership with the City of Greater Geraldton was imperative.

“It is the port’s job to facilitate trade, to control the port and to make sure passenger safety comes first,” he said.

Ms Godfrey said since the arrival of the first cruise ship in 2003, Geraldton had seen a steady increase in the number of ships visiting.

Champion Bay will see five new cruise ships at anchor during 2012. Celebrity Century, Silver Shadow Albatross, Dawn Princess and Sea Princess will all make their maiden voyage to Geraldton. Radiance of the Seas will return in March, before Pacific Sun and Sea Princess visit during the remainder of 2012.