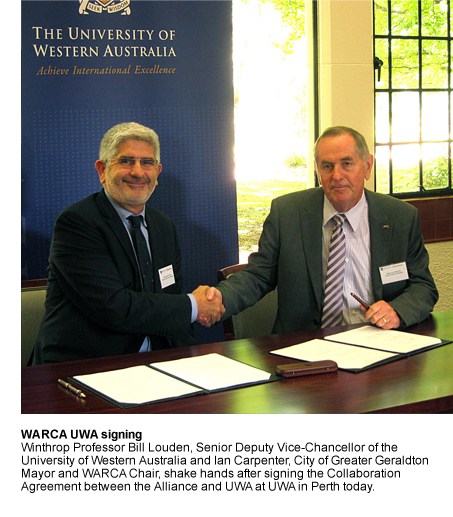 Today saw another positive step forward for the WA Regional Cities Alliance with the signing of a Collaboration Agreement between the Alliance and the University of Western Australia.

The agreement will fund a Professor of Regional Cities jointly between the Alliance and UWA to research on economic, social and infrastructure issues in the member cities.

Adding strength to the Alliance is the joining of a further three regional centres, increasing its membership to seven.

Last month the Shire of Broome and Town of Port Hedland came on board, quickly followed by the Shire of Roebourne; joining foundation members the Cities of Albany, Bunbury, Greater Geraldton and Kalgoorlie-Boulder.

The WA Regional Cities Alliance was formed in a bid to encourage more State planning in regional centres and to facilitate strong economic and population growth in regional cities as an alternative to Perth, and to also ensure that Western Australia grows and develops in a strong, diverse and distributed way.

Chair of the WARCA, City of Greater Geraldton Mayor, Ian Carpenter, said signing the Collaboration Agreement was a very exciting and significant development.

“This is a watershed moment for the regional cities as this is the first time a project of this calibre has been undertaken with the University of Western Australia,” he said.

“I think this project has the hallmark of creating a whole new level of understanding between government, the university and the regional cities.

“I’m also pleased to see other regional centres realise they will benefit greatly from the alliance.

“Forming this common alliance is the way forward at a State and National level in terms of planning for its economic and population growth, and I’m pleased to welcome the new members.” said Mayor Carpenter.